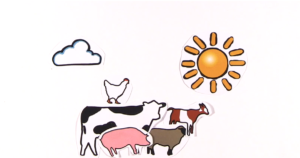 Livestock is a general term used for farm animals, such as dairy cattle, beef cattle, pigs, broilers and laying hens,  kept for use and profit. As part of agriculture, conventional livestock production is one of the main drivers of deforestation in the world. This system focuses on technologies for increased productivity, such as high-yielding breeds, modern feeding techniques, veterinary health products, as well as synthetic fertilizers and pesticides, which in itself represents a threat towards the environment. What is more, conventional livestock production takes up as much as about 70 % of the total agricultural land!

It is estimated that by the middle of the century, the global food demand will rise by 1.1 % per year. The demand for meat and milk by this time is expected to rise by 75 % and 60 % respectively, compared to the demand at the beginning of the century. If not properly managed, livestock production could cripple the life supporting systems of our biosphere and all other living beings sharing our planet. It is therefore increasingly important to understand the relationship between an increasing demand for livestock products and the exploitation and erosion of water and soil resources. Actions that need to be implemented in order to achieve sustainable production in and across different systems remain subject to debate. Today’s systems are challenged to increase production levels, while reducing their environmental impact and at the same time being economically viable and socially responsible. Some alternatives to conventional production already exist and will be mentioned in this Toolbox element, as well as further tools to reduce the impact of this agricultural practice on the environment.

Video The Environmental Impact of Livestock