The RUVIVAL SimGame 2019 has successfully concluded on Tuesday 25 June, with the dazzling display of wonderful outcomes yielded from the hard work of students during the two months. Three virtual Eco-Towns were planned, 1 located in Wales and 2 in Ethiopia. Over one hundred students joined in the game as eco-planners – 68 from TUHH in Germany and 37 from ICAM in France supported by external participants contributing to the game by playing the role of Eco-Town inhabitants. They united for the same goal and worked without hindrance despite of the different locations thanks to the online SimGame system.

Tasks in the Eco-Town planning game

The fundamental task of the students was to plan the future Eco-Town and find ways to incorporate various water and energy solutions with sustainable agricultural practices, while taking into consideration the specific challenges resulted from different geographic, political, economical and climatic conditions, as well as the diverse opinions of the inhabitants. To accomplish the final task, the students have gone through several steps and formed into different groups responsible for the respective development plans and town affairs. Approximately 370 posts and 1300 comments were created during these processes which paved the way to the final achievements.

It would be unfair to leave the SimGame without mentioning those important management roles. First is our Earth, the main character in the virtual world, who is responsible for publishing all the important announcements and sometimes interesting news. Earth knows everything in the world and gives direction by answering their questions.

This year over 50 articles were published in our newspaper reporting about the town meetings and planning progress. Each article was also discussed in the comment section and all participants were not only up to date, but also well informed on new developments in the area of environmental practices and technologies.

Travelling to other parts of this fictional world was made possible by the Travel Agent, the smart robot who is responsible for the travel agency. Overall 22 travel tickets were issued to the participants, most of which led to Ethiopia and Arba Minch being the most popular towns. The currency in the game to get a ticket were written articles as we considered the spread of useful knowledge as most valuable. 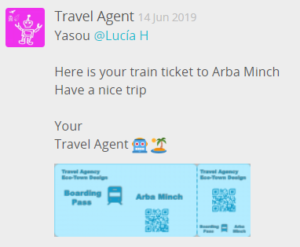 Town meetings and a final conference were held in form of an online video conference so that it was possible for all participants to present and discuss the concepts not just in written form. This multimedia concept made it possible to develop three elaborate plans for three sites with very diverse environments.

As in the real life, the virtual world will keep growing and improving from the intense exchange and interactions. We are happy to announce that the next round is already planned for 2020! We are in negotiations to get more Universities, especially from Africa, involved and hope to find more future inhabitants from all over the world willing to share their knowledge. Stay tuned for the next round of SimGame!